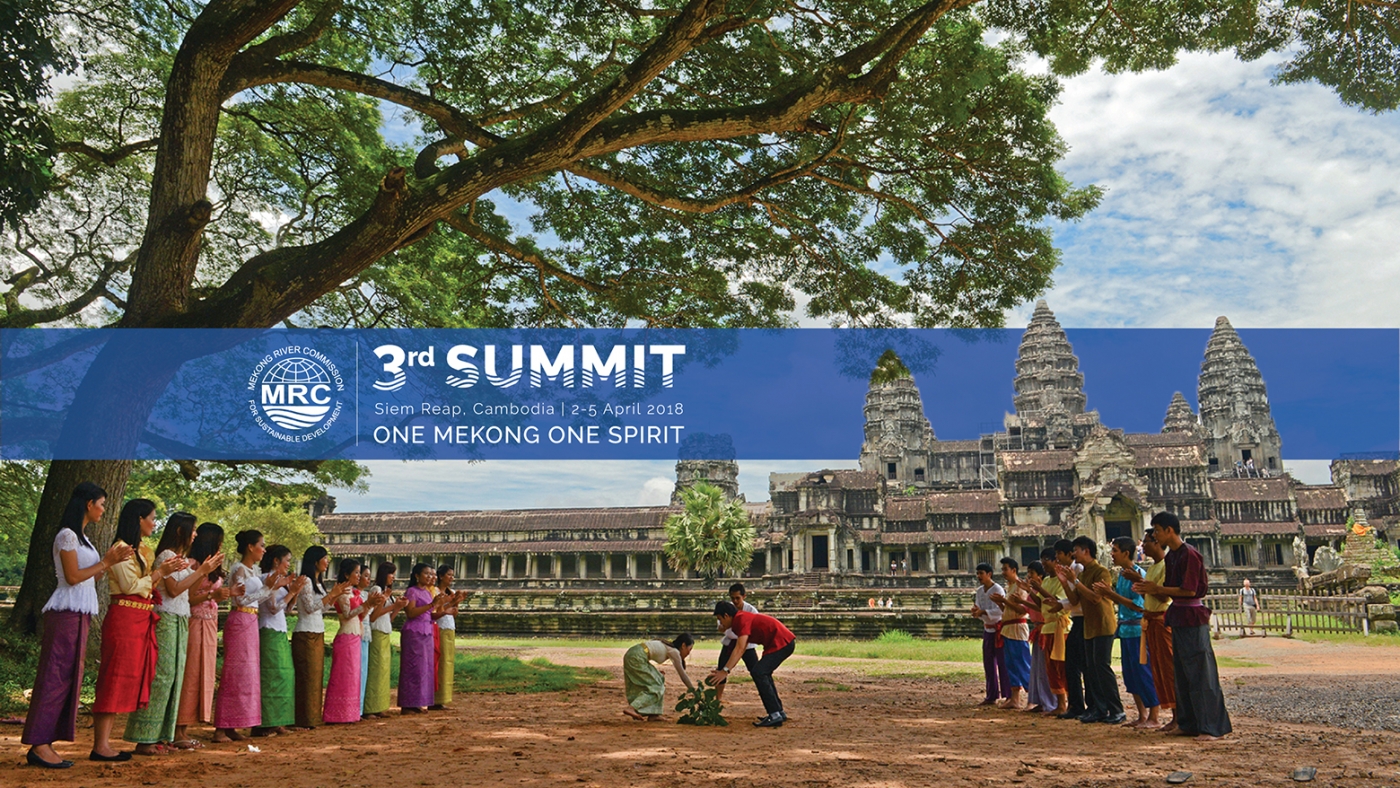 Vientiane, Lao PDR, 29 March 2018 — Next week, the Mekong River Commission (MRC) will convene the 3rd MRC Summit in Siem Reap, Cambodia. This capstone event will bring together the four Prime Ministers of Cambodia, Lao PDR, Thailand, and Viet Nam, and high-level representatives from China and Myanmar, the MRC’s dialogue partners.

“This will be the third time the leaders of the Mekong come together to reaffirm their highest commitment to the MRC’s mandate and work for an economically prosperous, socially just, and environmentally sound Mekong River Basin,” said MRC CEO Mr. Pham Tuan Phan.

The summit takes place on 4-5 April and is preceded by a two-day international conference. The event’s tagline, ‘One Mekong, One Spirit’, echoes one of its foremost objectives, namely to strengthen joint efforts and partnerships for sustainable management and development of water and related resources in the Mekong River Basin. The MRC looks to strengthen ties both between the MRC member countries as well as partnerships with dialogue partners and other regional initiatives, partners and stakeholders.

“Considering the growing pressures on the basin—population increases, infrastructure development, and climate impacts—it is of utmost importance that we use this event as an opportunity to define a clear set of priorities. We need to work together, across borders and sectors, to ensure equitable sharing of water resources and related benefits,” added CEO Pham.

In addition, the event’s objectives include reiterating the MRC’s push to play an increasingly active role in supporting its member countries to achieve the Sustainable Development Goals, particularly, but not solely, Goal 6 on sustainable management of water.

Some of the most up-to-date information that may guide future development decisions can be found in the MRC’s recently completed Study on the Sustainable Management and Development of the Mekong River, including impacts of mainstream hydropower projects, or the Council Study. It highlights potential impacts, benefits, and trade-offs linked to current development plans, including hydropower, navigation, irrigation, and flood control projects on the Mekong mainstream and tributaries.

The study’s results will be discussed among other issues at the international conference. Key messages from this gathering will be brought to the attention of the Mekong leaders at the summit, in addition to key findings that were sent to them in December last year. Riparian staff at the MRC Secretariat have also conducted briefings on the study’s key findings to scholars, department directors general, line agencies, and national Mekong committees of four Mekong member countries.

The MRC expects the summit to help further solidify its role as the premier knowledge hub and water diplomacy platform in the river basin. The commission looks cross all sectors to meet multiple objectives, including sustaining fisheries, fostering sustainable hydropower, identifying opportunities for irrigated agriculture, maintaining the freedom of navigation, improving flood and drought management, and preserving important ecosystems.

Its recent achievements include strengthened engagement, communication and outreach efforts; a widely appreciated six-month prior consultation process for the Pak Beng hydropower project; the adoption of basin-wide strategies and actions plans on fisheries, climate change and gender; and finalisation of guidelines on environmental impact mitigation for hydropower and for transboundary environmental impact assessments.

The upcoming 3rd MRC Summit follows two previous summits, the first held in 2010, hosted by Thailand in Hua Hin, and the second in 2014, hosted by Viet Nam in Ho Chi Minh City. While the first summit catapulted MRC’s activities into an era of increased cooperation, the second one brought about stronger attention to the inter-dependencies between the water-using sectors, such as agriculture and energy.

The 3rd MRC Summit will culminate with the issuing of the Siem Reap Declaration, which will lay out high level priorities for the coming four years and reiterate the member countries’ shared responsibility for the future health and wealth of the Mekong River Basin.

Notes to the editor:

The MRC is an intergovernmental organisation for regional dialogue and cooperation in the lower Mekong river basin, established in 1995 based on the Mekong Agreement between Cambodia, Lao PDR, Thailand and Viet Nam. The organisation serves as a regional platform for water diplomacy as well as a knowledge hub of water resources management for the sustainable development of the region.

Learn more about the summit: www.mrcsummit.org

Read this news in Khmer, Lao, Thai  or Vietnamese