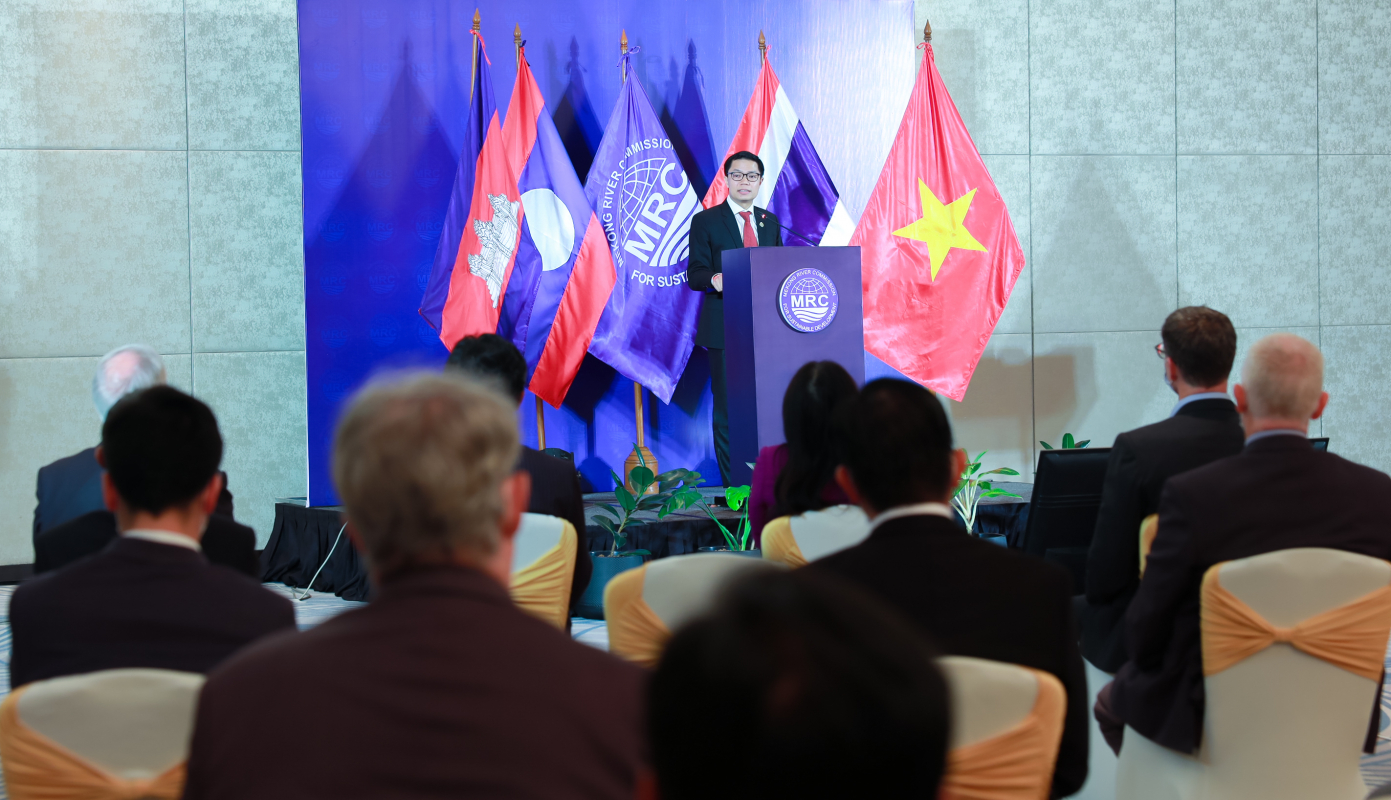 Vientiane, Lao PDR, 7 April 2022 — In a speech to mark “Mekong Day,” the Mekong River Commission Secretariat CEO sounded the alarm about the health and “unprecedented challenge” now facing Southeast Asia’s largest waterway, after four straight years of low-flow and unsustainable development activities that have ravaged the region’s wetlands and the livelihoods for millions.

Speaking on April 5th before ambassadors, heads of international organizations and other distinguished guests – in a speech that was also broadcast live to thousands on social media – Dr Anoulak Kittikhoun presented the facts about the ongoing damage done to a river that is the lifeblood to some 70 million people. Especially, those who rely on it for fishing and farming.

“I wish I could bring you only good news about the health of our river; however, it is my duty to continue to sound the alarm,” said Kittikhoun, in his sternest words since being appointed in January as the intergovernmental organization’s first Laotian CEO. “Given the state of the Mekong today, we just cannot relax. Our feet should be on fire. We need to act, to survive and prosper.”

It wasn’t so long ago – during the decade from 2008 to 2017 – that the region, with a few exceptions, saw generally normal, healthy levels of water flow throughout the Lower Mekong River Basin. Rapid economic growth brought better living conditions in the Basin, bolstered by Mekong River waters and related resources.  Upstream storages had even brought opportunities for more dry-season irrigation, reduced flood peaks, and the ability to push out the intrusion of salinity into the Delta. In the years since, though, drought, floods and new water-infrastructure projects have taken a toll.

The water-flow during the wet season is now, on average, 50% lower. The wet season itself has shrunk from five months – June to October – down to four months: July to October.

Beyond the disappearing wetlands today, nourishing sediment has diminished due to sediment trapping and sand mining; rising salinity is spoiling rice crops; lower concentrations of dissolved oxygen affect the breathing ability of certain fish; and exploitative fishing practices have reduced catch amounts, and even fish size.

Combined with the COVID-19 pandemic, all these factors are creating hardship for millions of vulnerable fishing and farming families. According to the MRC data, about one-third of affected households noted lower income than five years ago; more than 60% reported losses due to flood and drought.

That reality helps explain why the new Secretariat leader of the MRC – which is comprised of Member Countries Cambodia, Lao PDR, Thailand and Viet Nam, as well as upriver Dialogue Partners China and Myanmar – chose April 5th to be as blunt as possible: On that day in 1995, the signing of the Mekong Agreement also established the MRC. The Secretariat and its CEO serve the MRC.

“That kind of intergovernmental cooperation is just as essential today, as it was back then,” Kittikhoun told the audience. Some of the Mekong’s challenges are “caused by nature and climate-change, of course. But much is also human-made.”

However, as he also explained, “The news isn’t all gloomy.”

In recent years, the MRC, with the support of partners, has built a solid foundation in increased knowledge, tools and cooperative mechanisms. It’s now upping its game even more. For example, it’s developed a “State of the Basin” monitoring and reporting system to track the status and trends in five strategic indicators: environmental, social, economic, climate change and cooperation.

Just last week, the MRC launched a new monitoring station at Xieng Kok, on Laos’ northern border with Myanmar. It’s the first station to be positioned atop the Lower Mekong. Like this facility, each new or refurbished station is equipped with cutting-edge “telemetry” that transmits current water levels and rainfall data every 15 minutes – which can warn all denizens downriver.

Similarly, the MRC’s Regional Flood and Drought Management Centre, based in Phnom Penh, has boosted the region’s forecasting capabilities – which helps to save lives and protect property.

In the area of “Water Diplomacy,” a milestone in MRC-China cooperation was achieved in 2020, when Beijing agreed to share their year-round hydrological data, not just its wet-season data. Advance information enables countries and people to better prepare for water restrictions or release.

With so many inter-connected, trans-boundary matters, we must “bring the science directly to the people,” said Kittikhoun, “so that we can discuss Mekong issues based on facts and not feelings.”

Indeed, it’s not just governments or the MRC that must assume responsibility for the mighty Mekong. The Mekong Basin Development Strategy 2021–2030, he noted, is “a path-breaking strategy, that if implemented by all, will turn the tide towards more optimal and sustainable development.”

“All of us can play a role,” Kittikhoun concluded. “With our vital waterway facing so many challenges, will we just sit and hope our problems go away? Or will we rise to the occasion? And together, build knowledge, make innovation and maintain cooperation.”

“The choice is yours, but I hope you choose to join us.”